Snaefellsjokull is a volcano topped with a glacier in the West of Iceland. The geological term for this type of a volcano is a stratovolcano and these sorts of volcanoes can be found spread around Iceland. Another example of a stratovolcano would be the famous Eyjafjallajökull which famously erupted in 2010. But, before the ill-pronounceable glacier volcano in the south captured everyone’s attention Snæfellsjökull was undoubtedly the most famous glacier-volcano in Iceland. This was due to the fact that in the year 1864 the French author Jules Verne wrote about the volcano in his book “Journey to the Center of the Earth” where he described the Icelandic volcano to be the entrance to the earth’s core and even had his characters go this way. A more recent mention of the stratovolcano would be in the eponym movie starring Brendan Fraser and the Icelandic actress Anita Briem.

The area of Snaefellsjokull was transformed into a National Park in the year 2001 which covers the western tip of the Snæfellsnes Peninsula. All around the glacier volcano you find dark rough lava which curls together into a massive lava field covering the majority of the peninsula so the peaking 1,446 meters (4,744 ft) high glacier volcano stands blatantly out anywhere you are located in the area.

All though Snæfellsjökull is a very talked about glacier volcano in Iceland is believed to have erupted last between the years 50 AD and 350 AD, a few hundred years before the island would be settled. Little is known about the dates that Snæfellsjökull was created but it is apart of a volcanic range which dates back 700.000 years. Over twenty distinct lava flows have been documented to have flown from the glacier volcano which gives us a good idea about the activity that it once possessed. 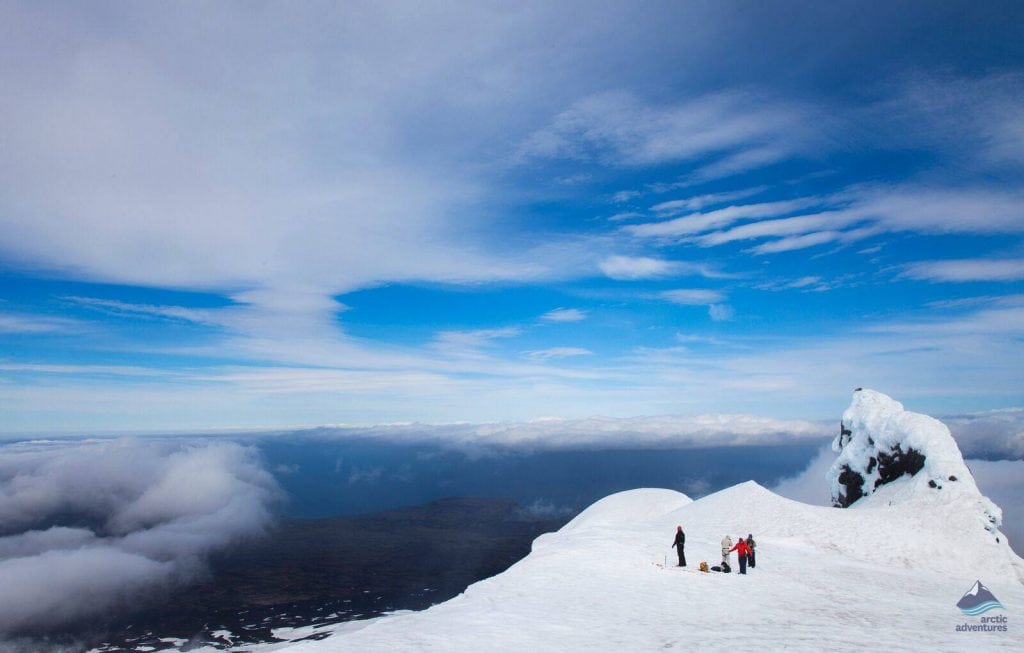 Bárður Snæfellsás is a fictional character is a folklore tale from the 14th century in Iceland. Bárður was half giant and half troll and was widely considered mighty, smart and handsome. The tale goes a little something like this: Bárður’s daughter was playing with his brothers when she somehow got stuck on an iceberg that was floating by. There was no way to save her and the iceberg took her all the way to Greenland. Upon her return she was not the same and not as close to her father as she had been before, she wandered around and could never find peace. Bárður fought his brothers after the incident blaming them for the incident.

This event grieved Bárður heavily and after his son had taken up Christian religion it all became too much for Bárður and he ended up giving all his belongings away. He told his friend and neighbor, Sigmundur, that he was leaving because of his deep sadness and that he did not feel as he belonged with men. He is said to have moved into a big cave in Snæfellsjökull glacier. After that, he was called Bárður Snæfellsás. Ever since he has been a savior and a guiding light to those on the glacier and people have called upon him when finding in harm’s way. Bárður is believed to have had many skills, some even say he could control the weather. 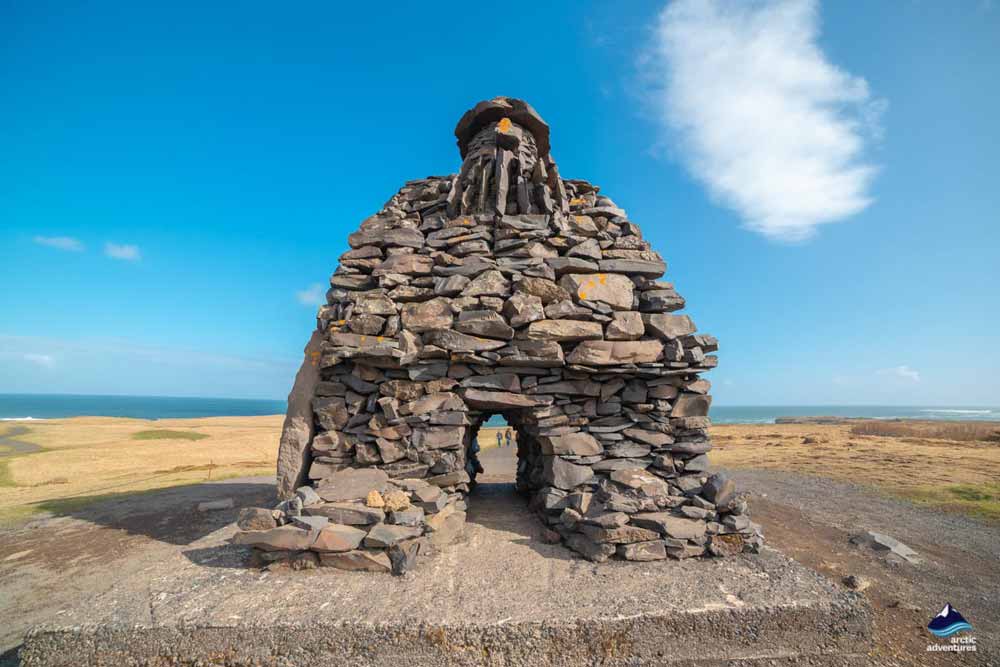 How to get to Snaefellsjokull?

You can easily get to Snæfellsjökull by getting a rental car and driving or simply joining one of those many tours to the glacier volcano which offer pick up from your accommodation in Reykjavík (see below).

Driving from Reykjavík to the Snæfellsjökull parking lot will take about 2,5-3 hours and is quite the scenic drive. Leaving Reykjavík you will head North following the Ring Road 1 past the famous totem mountain of Reykjavík mt. Esja. At the turn to Hvalfjörður you have the choice to drive the fjord named after whales or enter its undersea tunnel, Hvalfjarðargöng. The tunnel will shorten the trip by one hour but if you are looking for a beautiful quiet drive or a nice picnic stop then you might want to consider it. No matter the option you choose your next location is Borgarfjörður valley and its biggest town Borgarnes. At the last roundabout in Borgarnes, you choose to make a turn onto road 54 to the Snæfellsnes Peninsula which will take you all the way to the parking lot. The drive from Borgarnes to Snæfellsjökull parking lot will take about 1 hour and 40 minutes and take you past many stunning locations. Enjoy the drive!

How to explore Snaefellsjokull? 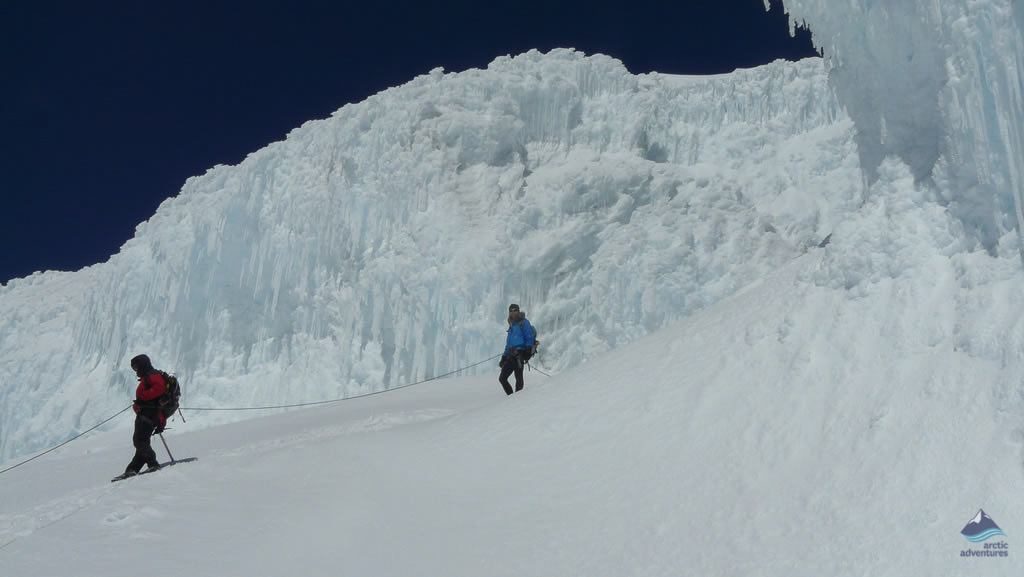 Where to stay near Snaefellsjokull?

Arnarstapi Camping Ground or what it is more commonly known as the Snjofell camping ground. Quite a large field and great views stretching over the coast and marine. The facilities are standard for tents and campers.

Ólafsvík Camping Ground offers fantastic facilities for tents and campervans and is close to all the services you might need being located in the town of Ólafsvík. Only 15 minutes walking to the local swimming pool.

Hellissandur Camping Ground is located in the beautiful Sandahraun lava field and offers all the standard facilities for tents and camper vans. There are sterling walking paths along the beach a little down from the grounds and the view from the area is amazing.

Where to eat near Snaefellsjokull?

Journey to the Center of the Earth (2008) the movie is named after the famous Jules Verne but the script is based on the book. There Brendan Fraser and Anita Briem take on the quest of entering Snæfellsjökull to get to the earth’s core. The movie is filmed in the are of Snæfellsjökull. 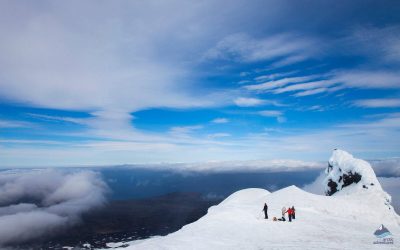