Hjörleifshöfði or the cape of Hjörleifur is an enormous rock, 221 meters (725 ft)  located at the South West corner of Mýrdalssandur Black Sand Beach. It formed in a volcanic eruption underneath a glacier during an ice age, although which ice age is yet to be discovered.

The name of Hjörleifshöfði comes from one of the most famous settlers in Iceland’s history, Hjörleifur, who was the brother of Ingólfur Arnarsson and you can visit his grave on the top of the cape.

There are fantastic and historical trails to be walked all around the cape and the views are truly otherworldly. Hjörleifshöfði was a settled farm until the year 1936, located right at the top of the cape after being moved in a volcanic eruption a few hundred years before. The farmland was considered great especially due to the lively wildlife, including the birds puffins and auk, whose eggs and considered a delicacy.

The formation of Hjörleifshöfði Cape

The cape is made from natural tuff which tells us the geological tale that the cape was formed when a volcanic eruption occurred underneath a glacier which results in the forming of a tuff rock. The cape has not been successfully aged identified and could there for range from being 120.000 years old to 200.000 years old. The cape was surrounded by the ocean after the last ice age but slowly the beach has dried up and when the settlers started arriving in Iceland the cape stood out quite clearly. When Katla volcano erupted in the 14th century the meltwater from its glacier pushed the volcanic sand down to the ocean and it is this and you will now see all around the cape. 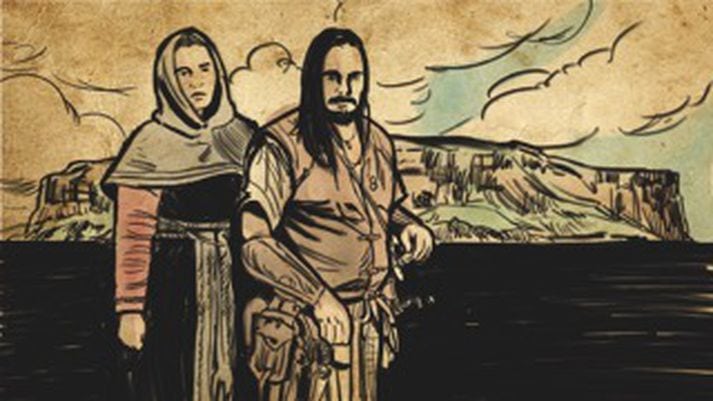 The cape is named after the Viking settler Hjörleifur Hróðmarsson, Ingólfur Arnarsson foster-brother. They sailed together from Norway to Iceland on separate ships but got somehow got separated and ended up staying the winter in different capes. Hjörleifur’s slaves killed Hjörleifur and fled with his women and things to the Westman Islands, which take their name from these Irish slaves. Ingólfur his brother, heard what had happened, sailed to Westman Islands and killed the Irish slaves, therefore avenging his brother “an eye for an eye”.

At the top of the Hjörleifshöfði cave is a landmark named Hjörleifshaugur and that is where Hjörleifur is believed to have been buried. 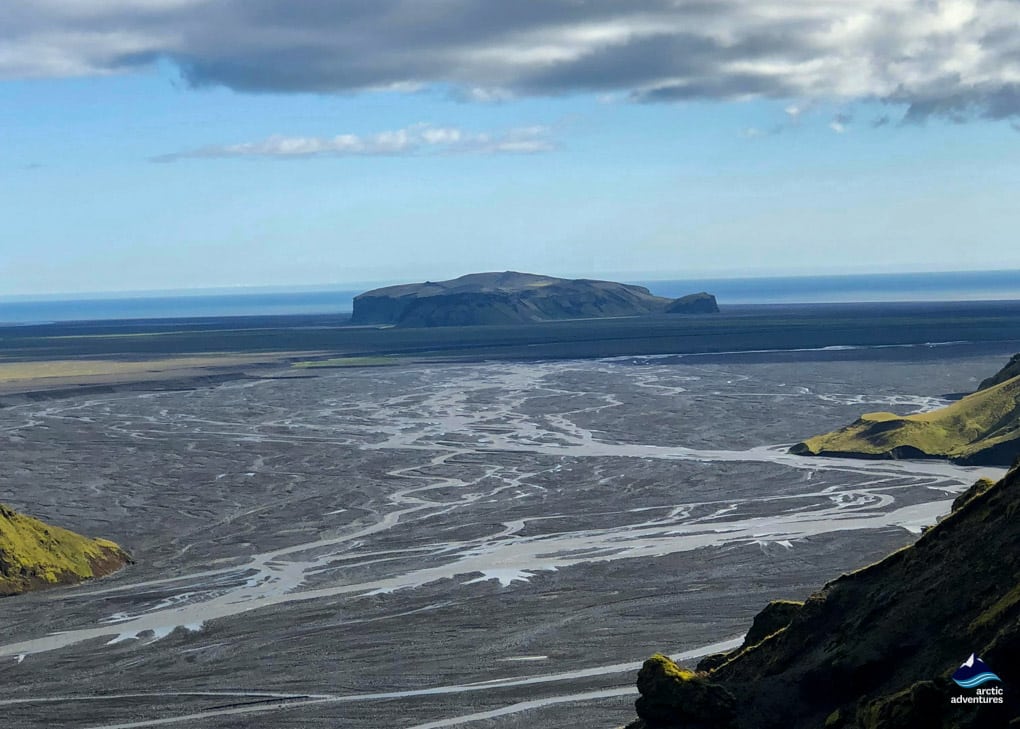 How to get to Hjörleifshöfði?

Hjörleifshöfði is easily accessible from Ring Road One as the road down to the cape leads straight from it. When driving from Reykjavík you make a left turn down South towards the ocean and drive only a few minutes before reaching the parking lot.

The place is also a great spot for a picnic or an afternoon nature nap while traveling in Iceland.

There are a few different ways to go about hiking up to Hjörleifshöfði but the easiest ones, and the ones we recommend are on the West side of the cape. The hike is about seven km (4,3 mi) and shouldn’t take more than two to three hours. The first hiking path is up Bæjarstaður where Hjörleifur, the Viking settler lived and the second one is up a pass called Klif. There is a map of the cape, where these locations are clearly marked so you can easily know where to go and your options for walking down. The best way to hike Hjörleifshöfði is to go up one way and down another, doing this will give you the absolute best way. You can both do this clockwise and counterclockwise but either way makes sure to stop a lot and take in the breathtaking scenery.

The view that awaits you is over Mýrdalsjökull glacier, Katla Volcano, the pitch black volcanic sand beach Mýrdalssandur and at the top of the cape you will find remarkable burial mound which was raised around the told burial site of Hjörleifur Hróðmarsson and right next to it a family plot had been raised in the memory of the former inhabitants.

Another monument found at the cape was built by Danish Surveyors and is a rounded peak shaped cairn. This monument can even be seen all the way from Ring Road one.

At the top, you can see the ruins of the farm that once was on the cape and a small waterfall is found in one of the hills. The place is a known spot for elves and hidden people so you should definitely keep an open mind and who knows you might meet one!

The last thing you can check out at the top of the cape is the guestbook. Feel free to sign and make your mark at this historical site.

The Yoda Cave is located in between the Gýgjagjá and Rituberg and you can find it on the map when you arrive. We recommend going up at Bæjarstaðagil and coming down near the cave. Finishing the hike around Hjörleifshöfði with a visit to this magical place makes it just perfect! 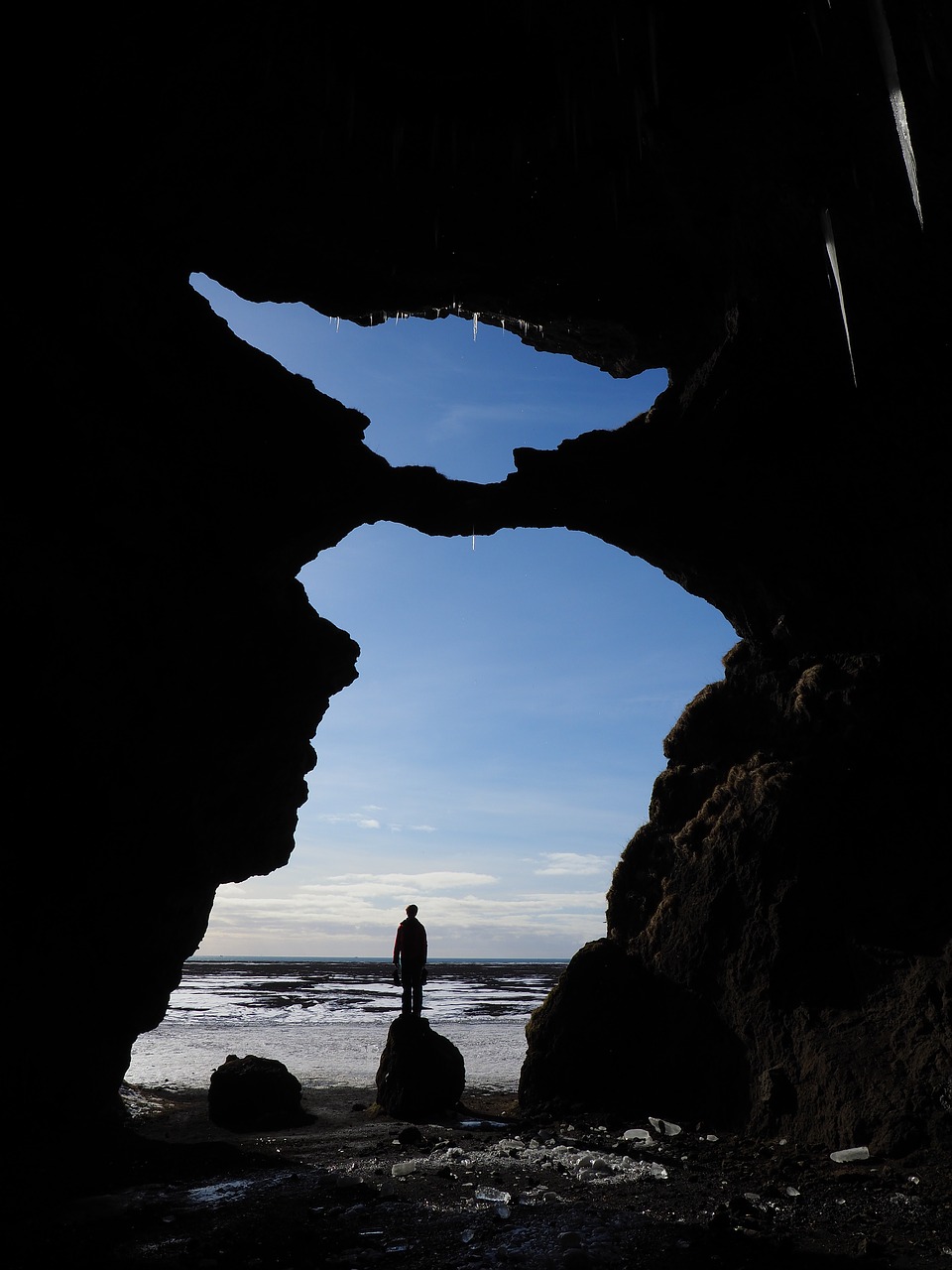 Hjörleifshöfði and the area around it have always been known in Iceland as both a beautiful and historical place but it wasn’t until the Hollywood movie Star Wars Rogue one was filmed there that travelers started flocking to the location. All around Iceland, you will find caves and caverns but this one is something else!

The cave is grand in volume, intense echoing and last but not least in its unique form. You can see that the cave’s opening reminds you of a shape you recognize as soon as you arrive, but after having entered the cave the view of the opening from inside out is simply supernatural. The opening of the cave looks exactly like an enormous Yoda, the legendary Jedi Master from the Star Wars movies. Even though small in size, Yoda is stronger than most in this connection with the Force, both wise and powerful. He has trained Jedis for over 800 years playing many integral roles in the Clone Wars including the guidance of Luke Skywalker and the unlocking of the path to immortality. The fact that Yoda is such an old character fits perfectly with the ancient location and formation of the cave and now that the newest Star Wars film was shot right in front of the cave you have yourself a Star Wars fan paradise.

Accommodation and Hotels near Hjörleifshöfði and Yoda Cave 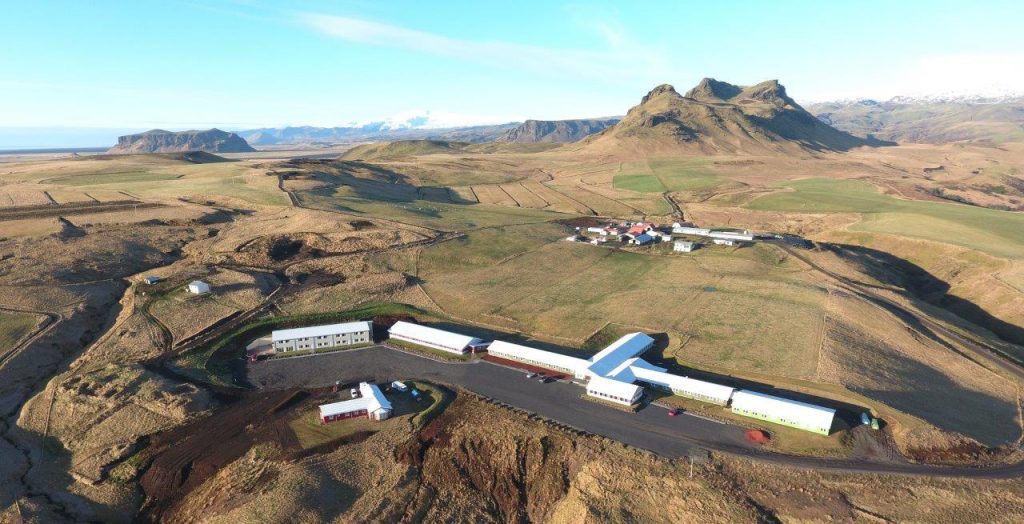 As Hjörleifshöfði is located so close to Vík, most of the accommodation options are located in Vík. The closest hotel is the Hotel Katla but there are also plenty of other options that are listed below:

Hjörleifshöfði and its surroundings were used to film the opening scene in the Stars Wars spin-off, Star Wars: Rogue One. Iceland was portrayed as the planet Lah’mu, the location where Jyn Erso and her parents are seen hiding at the beginning of the film. The moon-like landscape of Mýrdalssandur and the two capes in the background, Hjörleifshöfði and Hafursey, make for the perfect stellar scene and when the fully uniformed black stormtroopers march on the pitch black sand with its array of neon-green grass sticking out, the moment is just spellbinding! 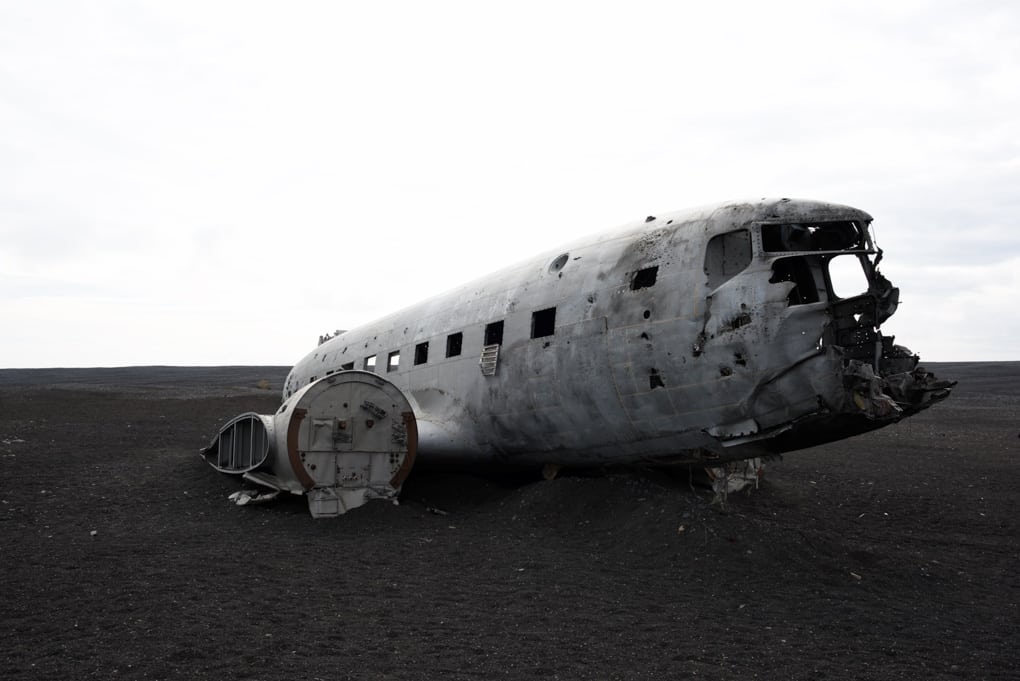 Interesting Places to visit near jörleifshöfði and Yoda Cave