Glymur waterfall certainly doesn’t let Iceland down when thinking of beautiful landscapes. Water cascades down a drop of 198m, making it Iceland’s second highest waterfall. If you’re looking for an experience that combines adventure and breathtaking views then you’re on track to the right place. Similarly, if you’re looking to travel slightly away from Reykjavík and explore the island then these sights are not to be missed. Being slightly further away from the city only means that you get to spend more time taking in the inspiring scenery of the country.

Only taking around 3 – 3 1/2 hours to hike depending on the pace you would like to take, the hike is a perfect day out away from the tourist destinations of the city. As well as the satisfaction of reaching the top, your adventurous side will be well and truly fulfilled after walking through a lava cave, rocky roads, and a river crossing. 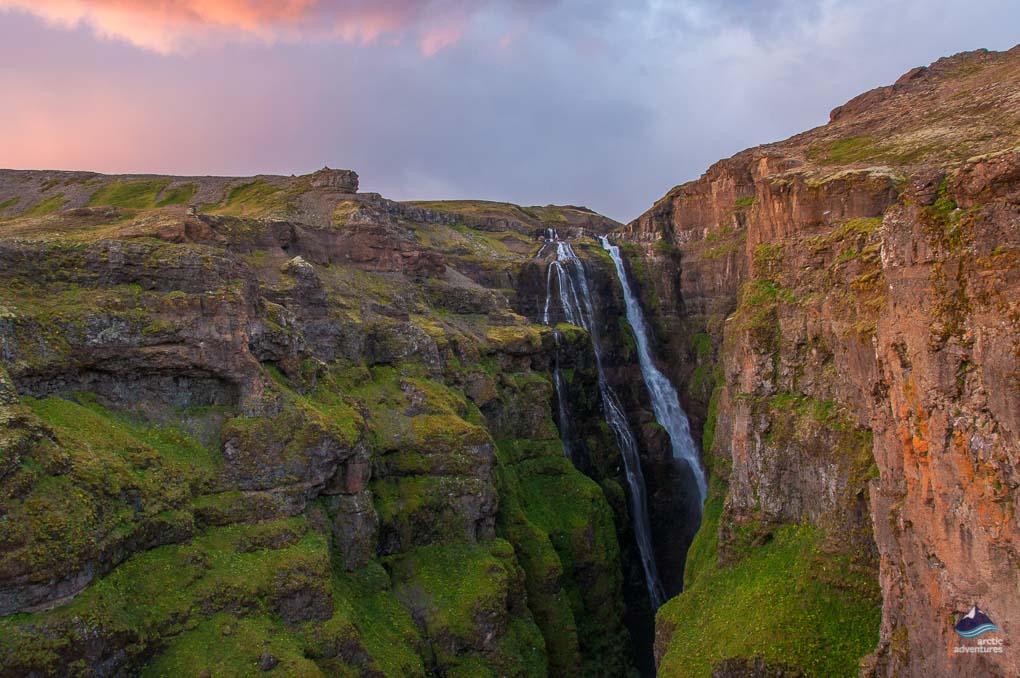 The story behind Glymur Waterfall

Understanding the story and history behind such a magnificent waterfall makes the hike all the more magical. It is thought to be said that long ago, farmers would head out to an island in order to collect eggs for the village. One year they were hit by a terrible storm and decided to turn back, however, they were forced to leave one behind. They were not able to return for some time due to the strong winds and as seasons passed, the man left behind was presumed dead. As spring arrived, they made the journey back to retrieve the eggs and came to find the man happy and healthy. He didn’t speak much but insisted on coming home.

After returning, everyone came together at church and it came to the congregation’s attention that a baby had been left at the steps to the entrance, wrapped in a blanket made of materials that no one had ever seen before. When asked no one knew who the baby belonged to, including the man. Just after, a beautiful woman appeared, heavily angered she threw the blanket into the church and shouted to the man ‘’you will become the worst whale in the sea’’. With that, she disappeared taking the baby, scared the man ran towards the ocean. He started to swell to an enormous size, taking the shape of a whale.

On land, it came to light that the months the man was on the island, an elf woman offered him her home during the cold winter months, to live among the elf people that inhabited the island. As winter drew to a close the elf woman told him she was carrying his baby. She promised to let him leave on the condition that when she appeared at the church he would ensure the baby was christened. But the promise was not kept. He had now become the worst whale in the sea. Seeping mayhem across the ocean, he ended the lives of any sailor who came across him. After killing two brothers, their blind father heard of the news and made his way to the ocean, stabbing his cane into the sea, the whale was forced to follow. As he walked further up the river bed the whale was faced with much difficulty. Reaching the bottom of the waterfall the whale became stuck and had no other option but to jump.

The waterfall now has its name (Whale lake) because of the resonant sound that came from the whale as it made its jump. The old man didn’t stop there, he brought the whale all the way to the lake where the whale exploded from exhaustion. Remains have since been found. So is the story true or folklore? You’ll have to decide when you reach the top and see what you find.

Where is Glymur Waterfall

This is the perfect trip if want to enjoy a short journey taking in the magnificent views that Hvalfjörður has to offer you. Only a 30-minute drive from Reykjavik, located in the west of Iceland you will find the starting point of the hike. It is part of the river Botnsá that flows out of Hvalvatn.

How to get to Glymur Waterfall 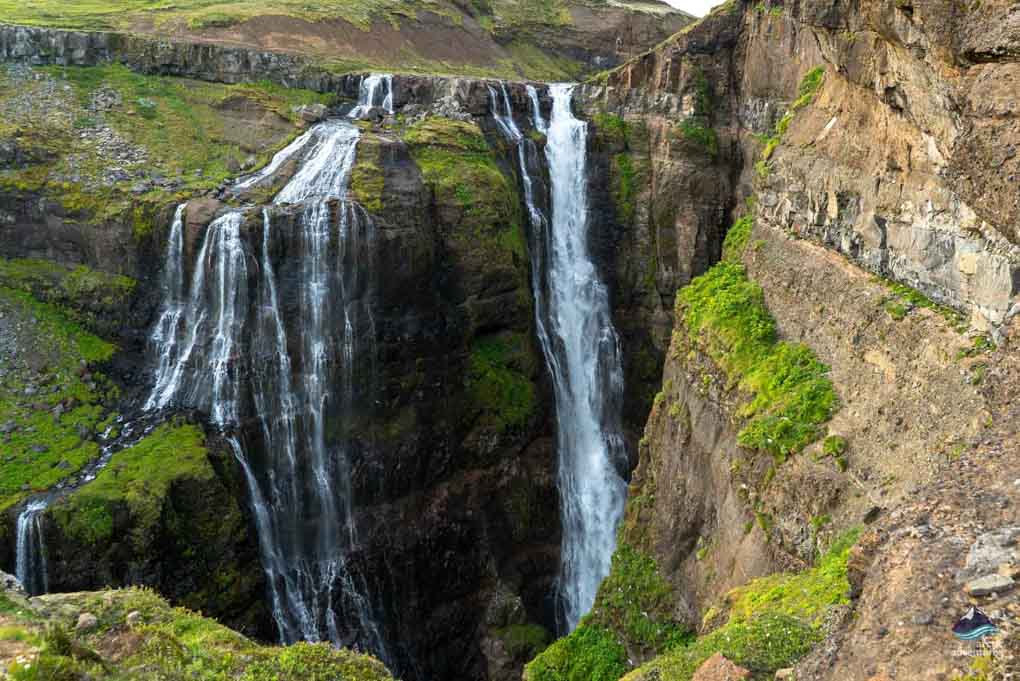 Joining a day tour can be extremely beneficial and is highly recommended as your guide will be able to show and tell you everything you need to know. It also means that you will not have to rent a car to travel to the location and will be taken good care of.

However, if you choose to explore yourself then it is best to take road number one when departing from Reykjavik. This will lead you towards Akranes. Before you reach Hvalfjordur underwater tunnel take a right turn which will lead you onto road 47. On your drive expect to be charmed by the smaller waterfalls that the surrounding area has to offer. This only builds excitement for the big one later. As you continue your journey into the bay you will come across signs for East Glymur. You will be met by a venturesome gravel road that leads to the parking lot where your adventure will begin.

The Hike to Glymur

It is fair to say that you should expect a lot and why shouldn’t you, you’re visiting the second highest waterfall in Iceland! Don’t worry, the hike is well marked and easy to follow. You will find yourself hiking through a mossy paradise consisting of views of canyons and lava fields.

As you enter the gate from the parking lot, you will be greeted by yellow sticks that highlight the hiking trail. Following a steady climb, get ready to be met by a cave which ascends down to a river. There’s no doubt your camera is already out, but if not you’ll want to have it handy to start snapping up the scenery. A wooden pole has been set out in order to help you cross the river. Although not deep, the river can be vigorous at times so a steel pole is ready for you to grip on to. Try not to show off as there will undoubtedly be people ready to capture the moment you fall in. At this point, you will have crossed the river that has spilled down from the waterfall.

This is where the daring part starts as it becomes moderately steeper. After using the ropes provided for extra added safety, get ready to be blown away by your first views of the waterfall. From here, it only gets better. As you carry on making your way up you’ll encounter another river. You’ve done it once already but this one is closer to the drop of the waterfall so brace yourself for the adrenaline kick. And you’re up, enjoy your efforts and take it all in! 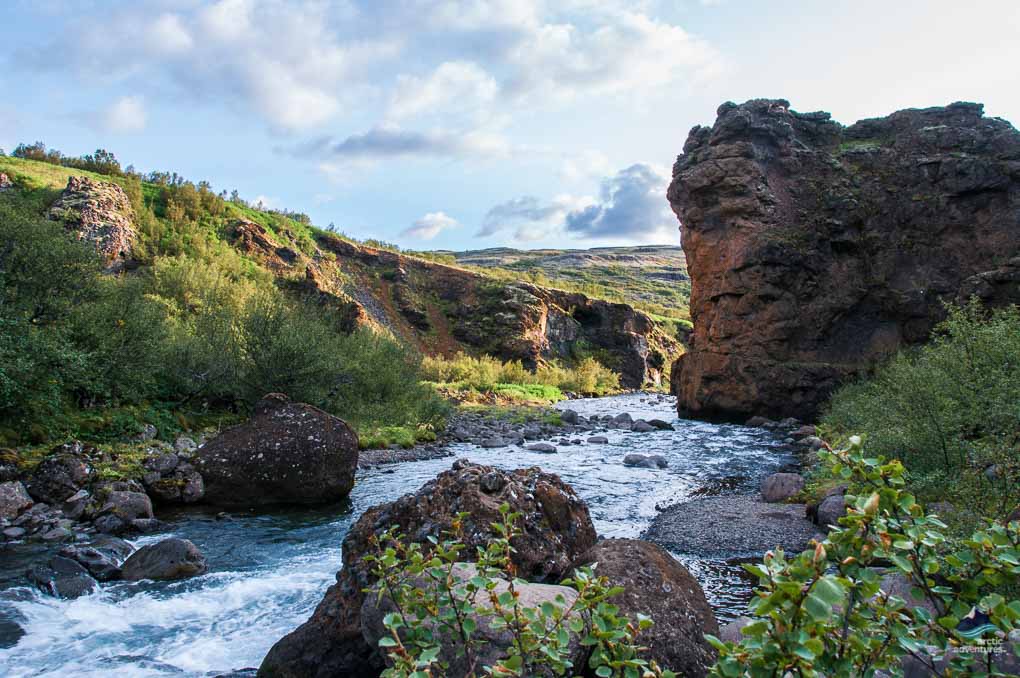 Top tips for your visit

If you haven’t heard yet, the weather in Iceland can be a bit temperamental. This means that packing clothes for all weather types wouldn’t hurt. Checking weather apps can be handy but even they can’t determine what Iceland might throw at you.

The good thing about joining a tour will mean that any equipment needed, will be provided. It is a given that hiking boots are a must no matter what the conditions, but if your choosing to go when the conditions are harsher it could mean that spikes are necessary especially if you choose to dare to go in the winter (this is definitely not recommended). It’s also not a bad idea to bring hiking poles for the trickier parts of the climb depending on your own preference and experience.

Bringing a packed lunch for when you reach the top, not only will it mean you can take in the beautiful views for longer but an energy boost will do you no harm. Make sure to bring a water bottle, having a taste of the water from the river will refresh you on your way up.

Glymur Waterfall in the winter

June to August are the best months to visit the waterfall as the conditions are a lot better and you will be able to see a lot more of what nature has to offer. Due to the extreme weather that can permit in the winter along with the challenging nature of the hike it is certainly not recommended that you visit in the winter seasons. Guided tours are not available in these months so it wouldn’t be the best idea to try and attempt the hike. In addition to this, the bridges probably wouldn’t be accessible in these months so you may not get very far. Stick to the warmer months!

Where to stay when visiting Glymur 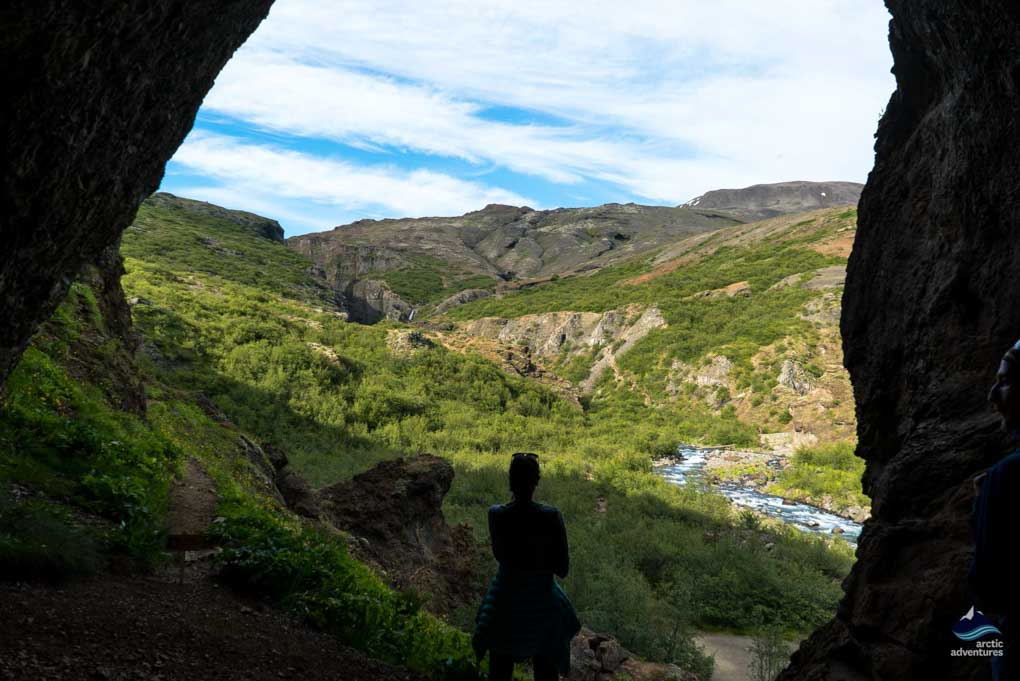 Not being far from Reykjavik means that you have a broad range of options in the city. There are many hotels, hostels and Airbnb’s available. Staying in Reykjavik can be slightly more expensive but is a good place to set up base if you want to take advantage of a variation of tours and experience the city.

If you are wanting to stay closer to Glymur Waterfall or in the surrounding areas then these may be suitable options for you and are all situated within 25 miles of the location. 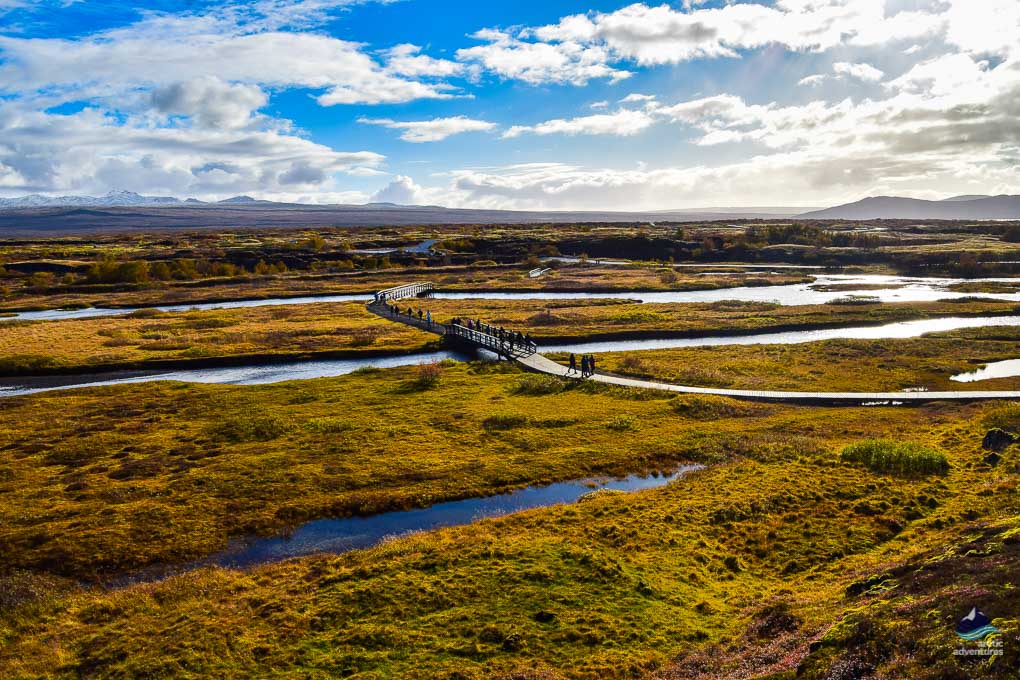 Thingvellir National Park is about 9.8 miles away and is a location waiting to be explored by you. It is home to the once in a lifetime tour to swim or dive between two tectonic plates, not one to be missed. If you’ve caught the buzz for waterfalls Öxarárfoss can be ticked off your list as it is only a short distance away.