Althingi Timeline
Thingvellir National Park – The Oldest Parlient in the World and its History
Iceland under Royal Leadership
Iceland and its independence
What happened next?
Parliament moved to Reykjavik
The Icelandic Parliament House in Reykjavik
Interesting Places near the Parliament 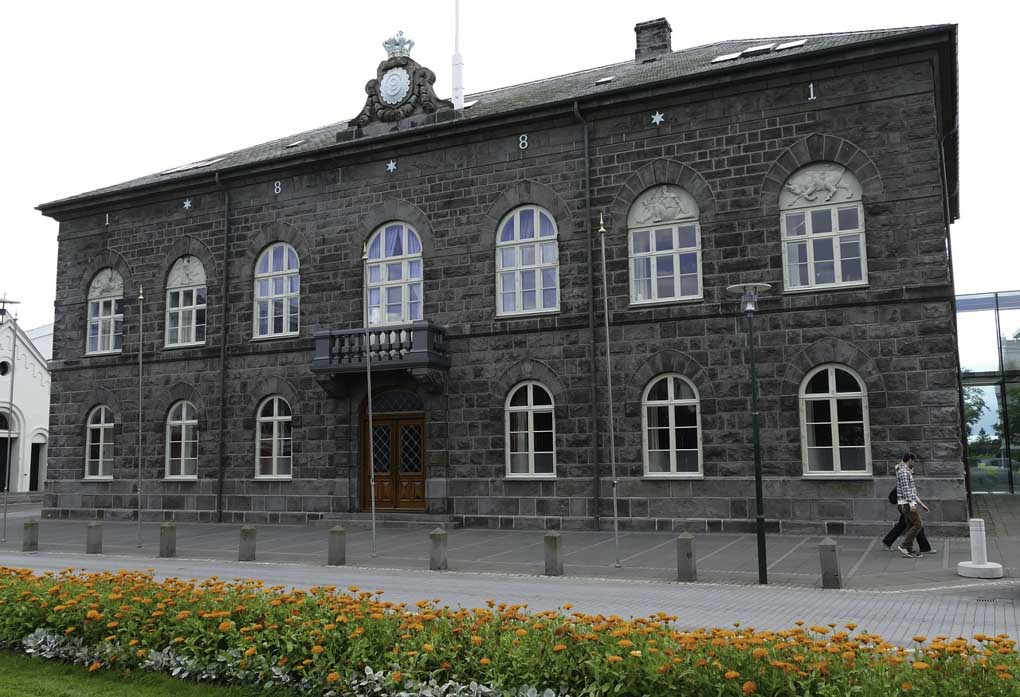 The Icelandic parliament, Alþingi is famous all around the world, not only for being the oldest but also for its grandstand in all things related to gender equality. Alþingi was founded in the year 930 AD and its first location was in Thingvellir National park. This is where Viking used to assemble to pass legislations and rule in matters and conflicts which had taken place throughout the year. The establishment of the parliament marked the end of the Settlement era and began the era known to the Commonwealth. Today the parliament is found at Kirkjuvegur downtown in Reykjavík right across from the lovely Dómkirkjan, the Reykjavík Cathedral. Its exquisite architecture has appeared time and again on world news, especially during the recent years due to, if put finely, turbulence in Iceland’s political atmosphere.

From the year 930 AD Alþingi would be assembled around mid-June and was in session for about two weeks time. Anyone who was a free and law-abiding citizen could attend the gathering which was well sought. Temporary tent camps, known as Búðir were raised for the people to stay in and meet up for gatherings and parties. 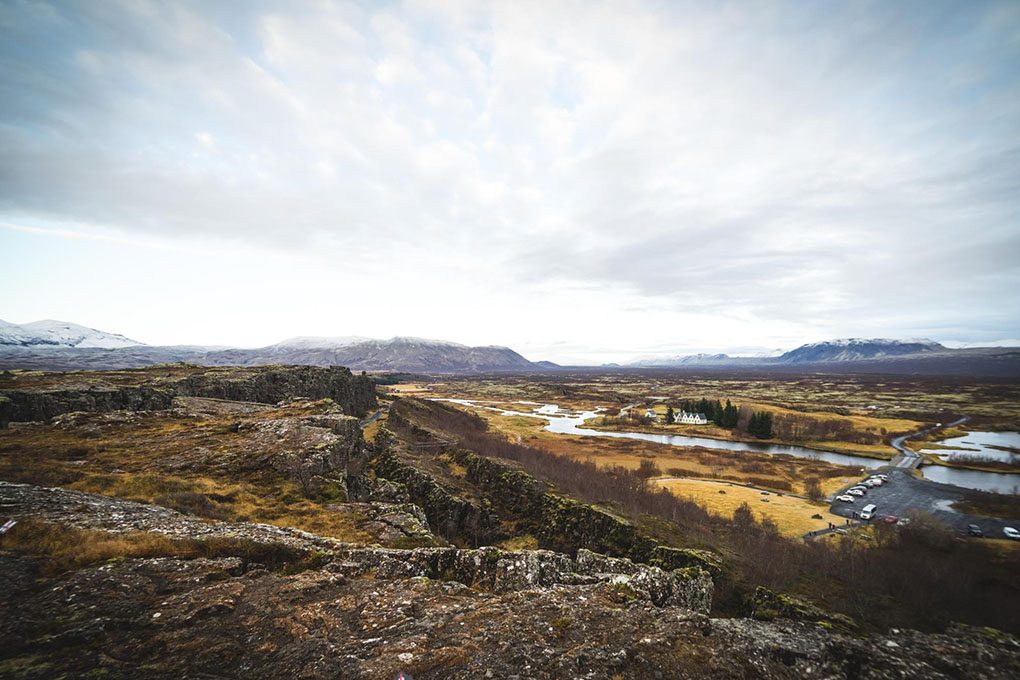 Lögrétta or the Law Council was the beating heart in the annual Alþingi event. This is where legal disputes were settled, new laws and legislation passed and people were sometimes given room to bend the rules a bit, especially if they had power or money. Lögrétta consisted of Goðar (chieftains), these goðar were accompanied by a team of advisors, who though didn’t have the right to vote. A ruling was made by the majority vote.

Later in the year 965 AD the country was split up into four quarters. Each quarter had 36 judges and for a verdict to be valid 31 judges has to agree. These verdicts were sentenced at Alþingi. In the 11th century yet another court was established which meant that now there were five. The fifth court was to serve for appeals. It was made up by 48 judges, who had been chosen by the goðar of Lögrétta and again the verdict was reached by a majority vote.

The cases that were being ruled in where in many ways unusual for the world at this time, way ahead inequality matters.

But in other ways, they weren’t so great for example when it came to witches and women who had children out of wedlock. They were often placed in jail or worse, drowned in Drekkingarhylur at Thingvellir, and witches are even known to have been burned. The unusual thing was that only four women were burned believed to be witches but over 20 men.

The highest authority figure at Althing was the Lögsögumaður e. the Law Speaker. A part of his role was to recite the laws of Iceland at Althing. This was an important factor before any written language existed in the country and the Lögsögumaður was greatly respected. Today this role could be compared to the role of Prime Minister. The Law Speaker spoke from the famous Lögberg e. Law Rock. This is where he would address the assembly, where important speeches were main, verdicts were stated and the Law Speaker would formally open and dissolve the parliament. This went on for some time but with the topic of religion on the rise in the country a civil war broke out. In the year 1262 after about 20 years of disputes and deadly fighting the Icelandic leaders chose to submit to the authority of the Norwegian king. Peace was finally established, and the Norwegian royal authorities introduced a new system of government. Icelanders were to be governed by two new law codes. First, it was the book Járnsída (Ironside) in 1271 and then, about 10 years later, the book Jónsbók (Jón’s Book) was published redefining the rules. These codes of conduct came from the King himself but were accepted by Icelanders at Althingi. The parliament continued to take place at Thingvellir but now in a new form, comprised of 36 members, who had been nominated by the sheriffs in each region. The Law Speaker was replaced by two Law Speakers, one representing the North and another the South and Lögrétta became a court of law for those cases that had been appealed from their regions. It basically became the Supreme Court. Before the ruling of Lögrétta had been final but now the king could overturn the verdict and people could seek appeals through him.

At this point, new laws were introduced from Norway and the central function of Althingi became to resolve court cases. This went on for a long time, the parliament became more efficient and at this time lasted no more than about four days but by the 17th century the population had grown and with more people came more cases and the parliament was up to two weeks again. Iceland had already seen a switch in their royal rulement as Denmark had taken over from Norway and now the Royal authority was a lot greater. After the Reformation of the 16th century, and in the Danish realm the king gained absolute power of Iceland and with this absolutism introduced the abolishment of certain ancient rights. With time Icelanders became quite dissatisfied and felt overlooked and powerless. Public demand for greater influence and a voice in the decision making for the country was on the rise.

Iceland and its independence

With a growing demand for independence and the dream of having their own assembly again, Icelanders started to raise their voice against the King. Young Icelanders who had been studying in Copenhagen were outraged when Icelanders were put on display as barbaric second class citizens at the famous World Show and they wouldn’t have it. They started to write about the importance of Iceland having its own leadership and in time the King consented to the foundation of an advisory assembly in Iceland. Althing was thereby re-established in the year 1843, followed by the country’s first official election in 1844. Althing now comprised of 26 members, 20 of them were nationally elected, one from each county or region, and six royal appointees. The right to vote and run for office was by the Danish model. It was only for males over the age of 25 years, which at this point meant only 5% off the nation was able to take part. 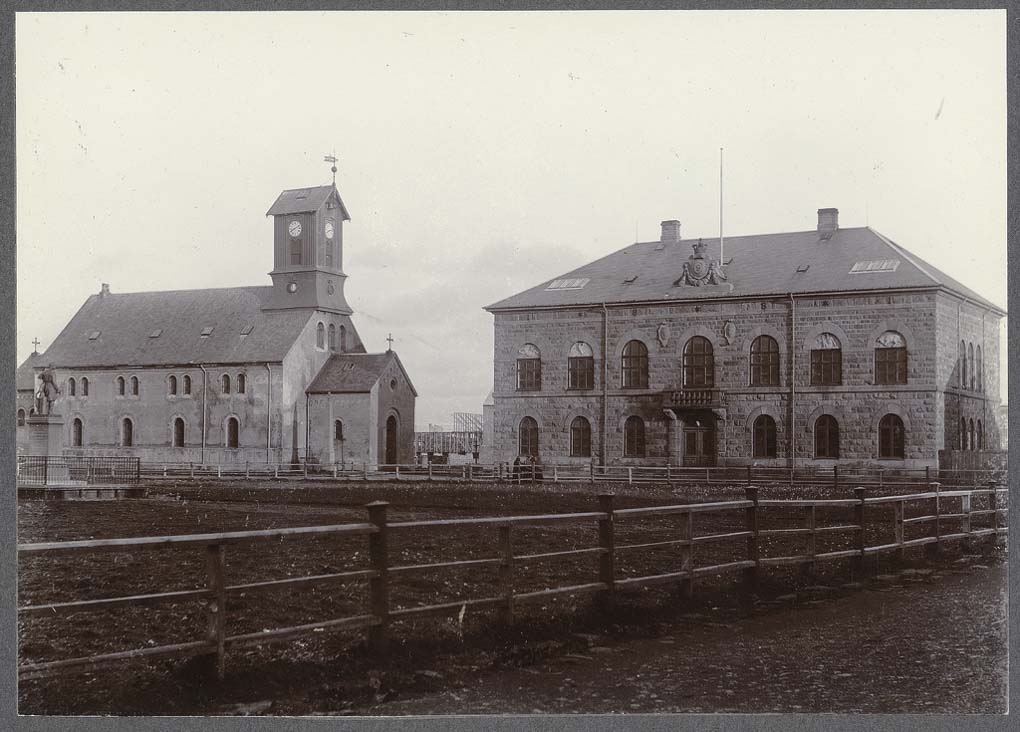 In 1845 the new parliament met for the first time, this was a big step for the nation and a memorable one.

In 1974 the constitution was created which granted Althingi a joint legislative power with the Danish crown but of course, only in matters which were in relation to Iceland. Denmark was still the ruler of the Kalmar Union at this time. When this happened the members of Althingi went from being 30 to 36. Out of these 36 were six appointed by the King. In the year 1903 Iceland was given home rule, one step closer to its independence which was at this point what everyone was talking about. In 1915 women were given the right to vote. On the 1st of December 1918 came the biggest step yet when Iceland joined Denmark into a personal union. This meant that the king long longer had any law-power over the country and the Althing had unlimited legislative powers and in 25 years time either state could choose to leave the union but only 22 years later, in 1940 Germans invaded Denmark and the union effectively severed. Icelanders knew that this was their chance, the following day the passed resolutions investing the Icelandic cabinet with the Head of state and declaring that Iceland would fully accept responsibility for the foreign policy and the coastal surveillance.

On the 17th of June in 1944 the Republic of Iceland was established, at Thingvellir National Park, where Iceland’s parliament had been founded 1014 years prior. Iceland was now officially on its own and fully independent. This day, the 17th of June is still celebrated every year as the country’s Independence day!

The parliament sessions at Thingvellir came to an end in the year 1798 but had then been in place for over 800 years in one location. Lögrétta was convened at Hólavelir School in Reykjavik (near the National Museum) but in 1800 Althing was abolished by the King’s order and the High Court made its replacer. At this point, the High Court consisted of three men and was the highest ruling found in Iceland until the establishment of the Supreme Court in 1920. 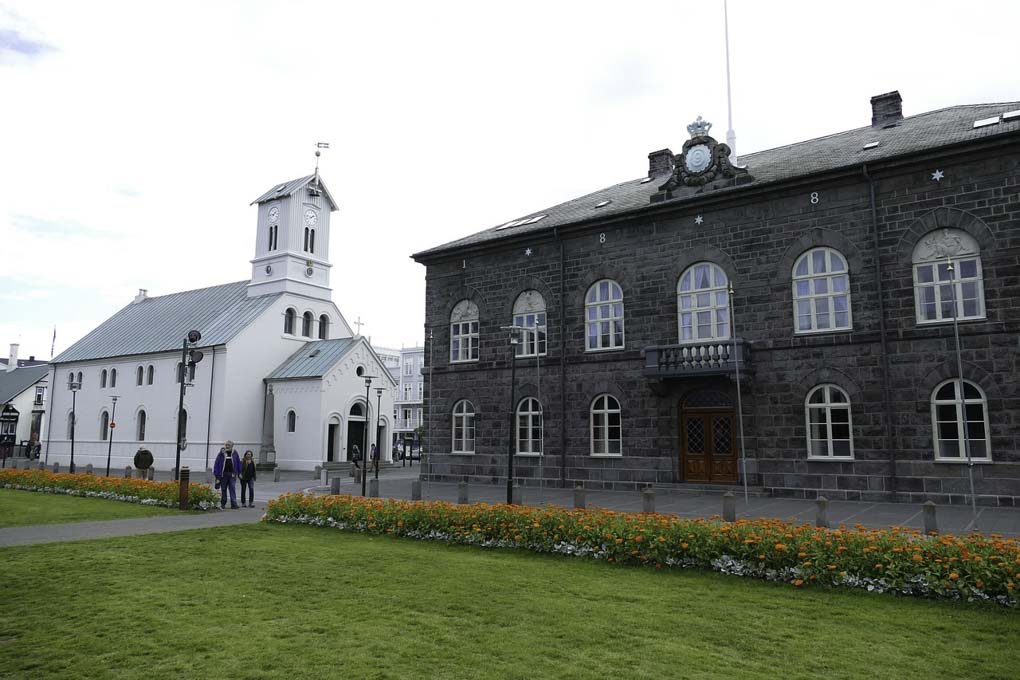 The Icelandic Parliament House in Reykjavik

The house of parliament as we know it today was built in the years 1880 to 1801 at Austurvöllur square. It was designed by the Danish architect Ferdinand Meldahl the director of the Academy of Fine Arts in Copenhagen and is made up by dolerite, a local basalt rock. This type of rock is very common in Icelandic nature and the roughness is evident as you see the building. The walls on the ground floor and immense, almost a meter thick and on the outward, they are cut in a neoclassic style. This neoclassical style reigns inside the building just as well and is the most prominent factor in the whole look of the place. In the lobby, you will find large paintings, one of the of particular interest but it is of the national conference in 1951 with Jón Sigurðsson standing in the middle. Two additional buildings have been added to the site since its original establishment, those are the Kringla in 1908 and the Skálinn in 2002.

Fun Fact: The University of Iceland was founded in 1911 and at that time some courses were taught in the parliament building. 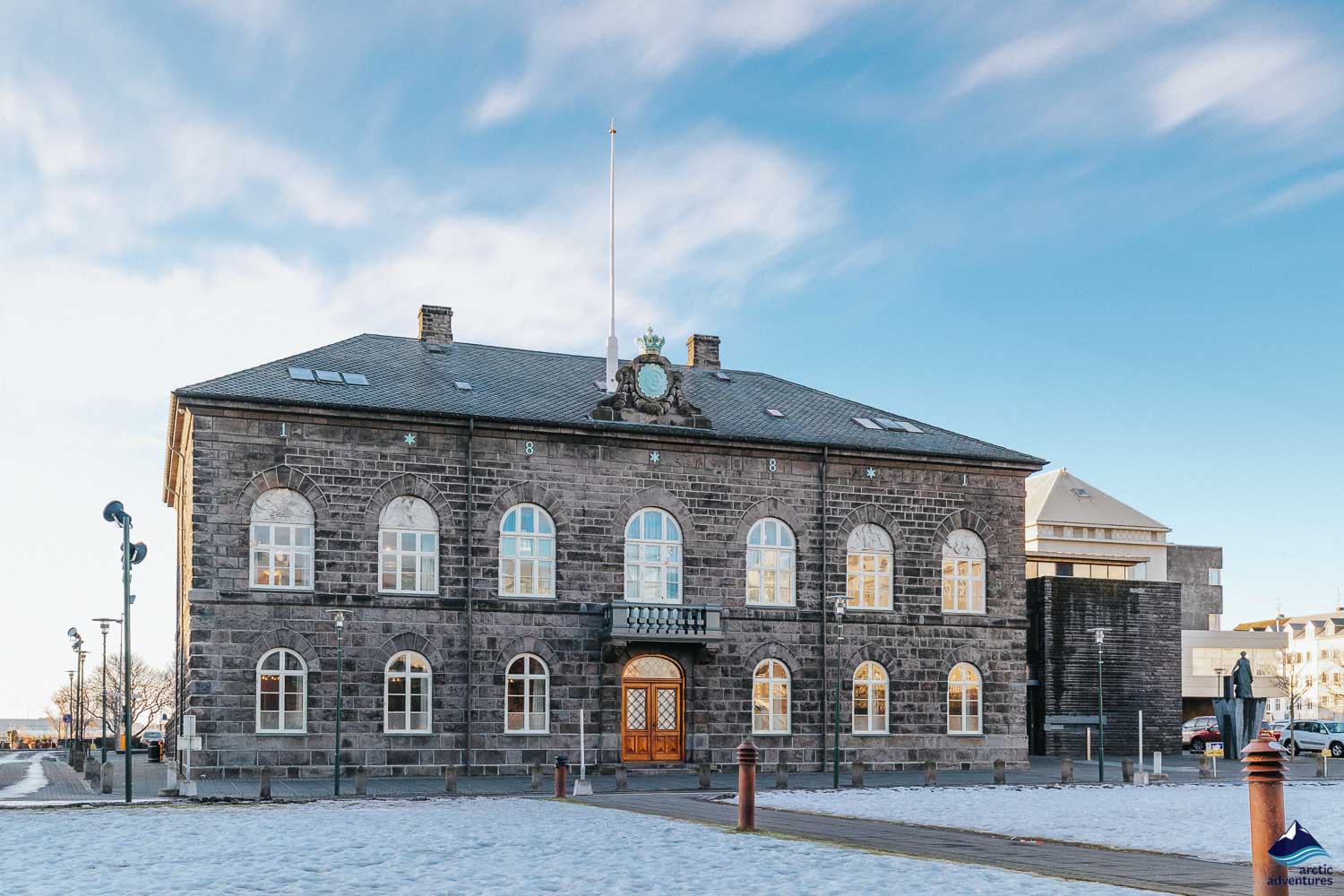 The Flower Garden behind the parliament house is open to the public. It was the first official flower garden in Iceland and has remained, for the most part, the same since the original design. The man behind the design was carpenter Tryggvi Gunnarsson who had studied agricultural science. His vision was of a colorful garden with various types of trees and plants but unfortunately, the cost of the project ended up going way over the budget. Tryggvi was so invested in seeing his plans come to life that in the end, he paid some of the cost out of his own pocket!  After all of his hard work Tryggvi couldn’t imagine any other place as his final resting place, so, eventually, his request was approved and today on the South side of the garden Tryggvi rests. Laying under Icelandic flowers and a beautiful bust sculpture that the sculptor Ríkharður Jónsson made of him.

Interesting Places near the Parliament

Today you can find Althing downtown in the capital, at Austurvöllur square. The same place it has been since early 1800. It is located right next to the Reykjavík’s Cathedral Dómkirkjan and had often been seen on news worldwide as protests are taking place in front of it. For example in the economic crash in 2008 and when the Prime Minister was found to have money hidden way in the famous Panama Papers. 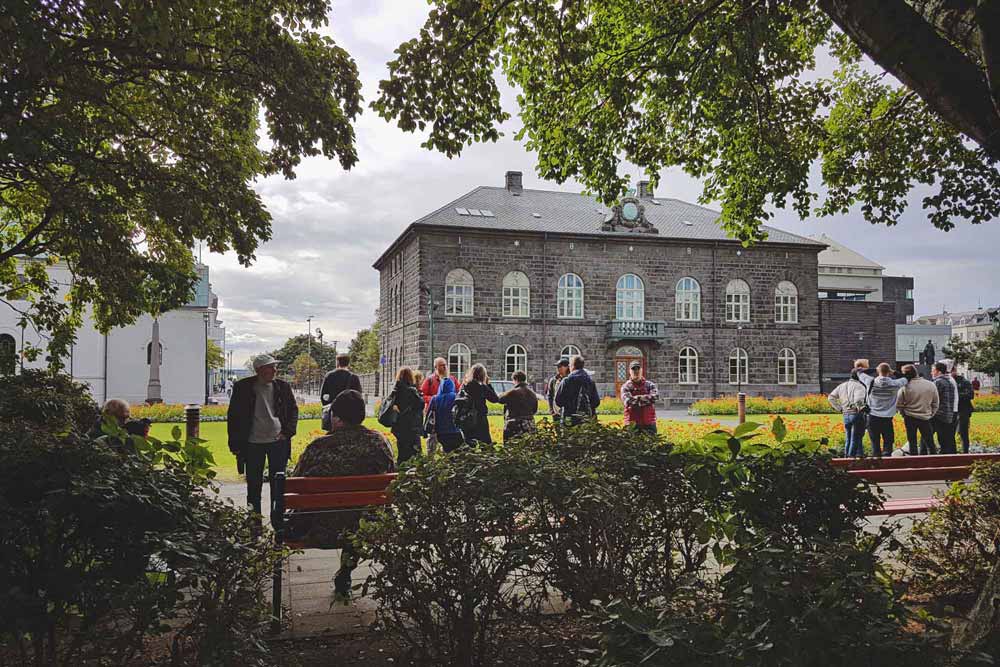 The main parties at Althingi today are The Independent party (far right), The Reform Party (central right), The Progressive Party (Central right – The part of known for focus of agriculture), The Central Party (parts of The Progressive Party established another party similar interests), The Social Democratic Alliance (central left), The People’s Party (the newcomers left-sided), The Left-Green Movement (far left) and The Pirate Party. 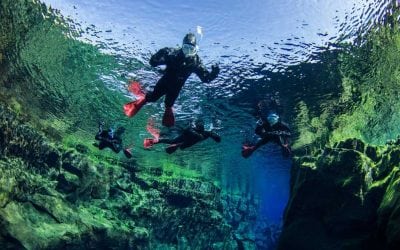 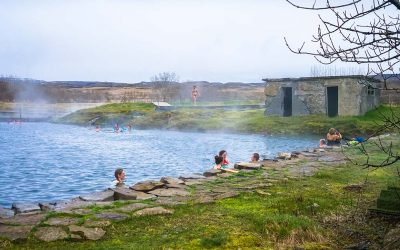 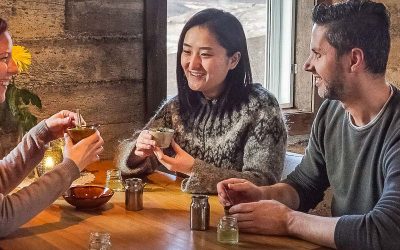