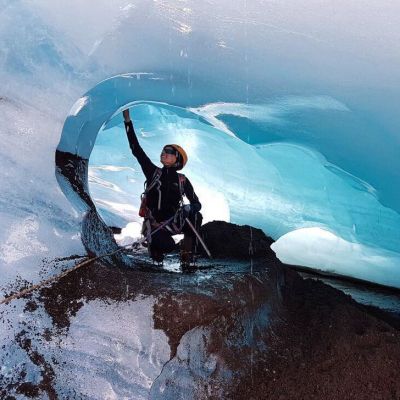 Is Iceland’s Mt. Thorbjorn Volcano About to Erupt Soon?

A recent announcement from the Icelandic Meteorological Office has triggered great excitement throughout Iceland. On January 26, the aviation color code was raised from green to yellow and a “state of uncertainty” was declared for the Reykjanes Peninsula because of possible magma accumulation beneath Mt. Thorbjorn. The volcano is only about 1.2 mi. (2 km) from Iceland’s famous Blue Lagoon.

Seismic and geothermal activity is typical throughout Iceland, but especially here on the Reykjanes Peninsula.

Iceland’s Reykjanes Peninsula is part of the UNESCO Global Geopark network — and for good reason. The 40,000-km-long Mid-Atlantic Ridge, a mountainous ocean rift that separates the Eurasian and North American tectonic plates, rises above the surface of the ocean here.

Although earthquakes in Iceland are very common, higher than average activity has been detected, with several earthquakes of over 3.5 magnitude in just a few days. These were felt on Reykjanes Peninsula and all the way to the capital region and beyond.

Experts also observed ground inflation of as much as 0.12 to 0.16 in (3 to 4 mm) per day – a total of 0.7 in (2 cm) over the course of just five days. This activity is considered highly unusual, even for Reykjanes. Nothing similar has been detected here for over three decades.

Calculations suggest there could be one million cubic meters of magma under the surface, potentially leading to  an eruption.

The measurements of the crustal deformation suggest that a large amount of molten lava is accumulating and approaching the surface, causing the land to rise. This phenomenon could be the sign of an upcoming volcanic eruption.

This type of fissure eruption is usually characterized by non-explosive, slow-moving lava.

Unlike the Eyjafjallajökull eruption of 2010, which disrupted the air travel for several weeks throughout all of Europe, this eruption would most likely happen without any explosive activity or volcanic ash clouds.

Even though the state of activity was officially changed from calm to uncertain, this doesn’t mean that the volcano will definitely erupt.

The seismic activity has only been happening for a few days and, at this point, it’s unclear whether it will escalate further. Scientists aren’t even entirely sure whether the observed activity was caused by magma accumulation or tectonic movement. Even if the theory of magma accumulation is correct, the activity could suddenly stop without any further events.

Iceland itself was formed by volcanic activity that was triggered by constant tectonic movement.

Continental plates drift apart at a rate of 0.8 in. (2 cm) annually. The last period of volcanic eruptions in the Reykjanes area began around the time of the First Icelandic Settlement in the ninth century and ended before the 14th century. These eruptions lasted anywhere from a few days to several weeks. Most of the peninsula’s rugged lava fields and barren landscapes were created during this period. Since then, there haven’t been any new eruptions on the peninsula.

This activity is a sign that the volcanoes are still active and building enough pressure to erupt. Generally, most tremors are minor. But every so often, they can be felt across the entire peninsula, reminding us of the enormous power hiding quietly beneath the surface. The largest earthquakes ever measured in the area were no stronger than M5.5.

There are several volcanic systems on the Reykjanes Peninsula containing hundreds of open fissures. Each system features a major high-temperature geothermal area characterized by intense surface activity, such as hot springs and steam vents. The famous Blue Lagoon is one of the by-products of this underground volcanic activity.

The Department of Civil Protection is preparing for every possible scenario.

Although the earthquake swarm is declining in intensity, the Department of Civil Protection is increasing monitoring in the area  to be on the safe side. They have called for a public community meeting with residents of the town of Grindavík, located right next to Mt. Þorbjörn, where local residents can find out everything they need to know about the uncertainty alert.

This is just how life in Iceland is!

The locals aren’t too worried about the possible eruption. They’re used to small earthquakes of this size, even though they are particularly regular at the moment. All towns, amenities, and attractions on the Reykjanes Peninsula remain open as usual. We’ll keep you updated with any news!

← Responsible Travel in Iceland: How to be Friendly to Nature April in Iceland: Everything you need to know →
Newest Popular Random
Month All Time
15 Best Things to Do in Iceland
Inside Vatnajökull Ice Cave, Iceland’s “Anaconda Ice Cave”
Hiking Laugavegur Trail, Iceland's Hot Spring Route
The Icelandic Horse: What Makes It So Unique?

You don’t need a spaceship to get to Mars — just a snowmobile, crampons and a harness.

March 25, 2019 , By Ragnheidur
What to know
Is Katla Volcano erupting?