Menu
More
Anhelina Zhaliazka
|July 24, 2019
Anhelina is a Belarussian who loves less-traveled places in the middle of nowhere. She's a content writer who believes that every location has that special spark worth sharing with the world.

We’ve collected tips, tricks, thoughts, and complaints that vacationers shared in their TripAdvisor reviews of Seljalandsfoss Waterfall. Authentic feedback plus useful tips is the combo of stress-free sightseeing.

Iceland is famous for its spectacular nature. This means not only drop-dead gorgeous views but also one-of-a-kind physical phenomena. Seljalandsfoss Waterfall on the South Coast is one of the best-known (out of 10,000!) waterfalls in Iceland.

The torrent falls about 200 feet (62 meters) off the cliff edge into the pool below. Most notably, you can walk behind it! A footpath leads behind the waterfall, allowing visitors to appreciate a complete 360° view.

Visitors flock to Seljalandsfoss for a chance to walk behind the falls and snap some awesome pictures. But behind every photo, there’s a story. Reading about other’s experience can make your trip easier!

8 Things Visitors Say About The Waterfall You Can Walk Behind

We’ve collected tips, tricks, thoughts, and complaints that vacationers shared in their TripAdvisor reviews of Seljalandsfoss Waterfall. Authentic feedback plus useful tips is the combo of stress-free sightseeing.

Let’s sneak behind the falls and see what we can find!

1. Can you walk behind Seljalandsfoss?

Yes! The walking path and small cave behind the falls make it incredibly popular with travelers.

The cascade falls from an impressive cliff. Visitors can walk on the footpath to look behind the falls. You can peer through the falling water, across the lowlands and out to sea. This is a breathtaking sight to behold, especially at sunset!

“…this was one of the first sightseeing stops and very memorable.”

Remember that not everyone finds climbing up the path easy. When there is strong wind or rain, the trails get slippery and muddy. Ropes behind the waterfall help you get around.

Be mindful of weather conditions and your physical fitness before starting this short hike. Even if you decide to skip the walk, the tumbling Seljalandsfoss and its foaming pool are just as impressive from the front!

Kids will love Seljalandsfoss as well — just make sure to look after your little ones at all times!

“I went there with my two kids, 7 and 3 years old. Always fun to stop by Seljalandsfoss and exciting to walk behind it every time, magical.”

2. Will I get wet when walking behind Seljalandsfoss?

Put on your waterproof gear before the trek to Seljalandsfoss, or you’ll get soaked in the glacial meltwater!

“I forgot the soap!”

Grab your waterproof jacket or raincoat before you head out. Sturdy footwear will help you climb over muddy spots on the trail. If you have kids traveling with you, hold their hands to keep them safe.

Drizzle from the waterfall will hit you from every direction. If you’re planning on snapping some shots, be sure to cover your phone or camera with special rain sleeve, shower cap or even a good old plastic bag.

3. Is it a good idea to see Seljalandsfoss at night / during sunset?

Yes, but it may be different than a daytime visit.

As the sun goes down, two massive floodlights light up, covering the area in an enchanting glow. In the summer, of course, the Midnight Sun lights up the falls for most of the night.

Another advantage of visiting Seljalandsfoss at night is that there are fewer (if any) tourists. As a general rule, you can beat the crowds by visiting either early in the morning or late at night. Who knows, you might even make friends with the guard!

“The guy working in the reception was awesome and funny — we hung out there all night.”

“I came back at 10:30 p.m. that same day to catch the sunset, and it was absolutely amazing. There were only about 10 people in the whole area. This is a MUST DO!”

4. Are drones allowed at Seljalandsfoss Waterfall?

“You also cannot fly a drone.”

Unfortunately, drones are prohibited at the waterfall, even though the views are begging for aerial shots. Near Seljalandsfoss you will see a “NO DRONES” sign as you get closer.

Because of the surge in the number of visitors with drones, most popular attractions (including many waterfalls) and national parks in Iceland have been deemed “drone-free zones.” This was done in order to keep the sites looking natural, without too many robots flying around.

But don’t worry, you don’t need the latest technology to admire the cascade. In the end, no photos can compare to the breathtaking memories you’ll have of Seljalandsfoss.

5. How can I visit Seljalandsfoss?

“Another stunning waterfall visited as a part of a day tour. Spent half the time there just watching the birds dive off the cliff…”

Seljalandsfoss is often included on tours of Iceland’s South Coast. Other gems on the Ring Road, like Skogafoss Waterfall, are also worth a visit!

Join a tour to see the highlights of this scenic country. Visit glaciers, volcanoes, and black sand beaches before getting to Seljalandsfoss — all in one day. Another option is to embark on a longer adventure and make sure that your multi-day tour includes this legendary waterfall on the itinerary!

How to Get There

The waterfall is about 74.5 mi (120 km) from the capital. If you drive directly from Reykjavik to Seljalandsfoss, you’ll be aiming for a 1h45 drive on the Ring Road.

Starting from the east, the falls are 37 mi (60 km) away from Vík and 18 mi (29.2 km) away from Skógafoss Waterfall. No matter the distance, pack your rain gear and hit the road. It’ll be worth it!

6. Are there any facilities near Seljalandsfoss?

“On-site there is a truck stop cafe, gift shop, and toilets, all very clean and well-maintained. The shop sells traditional Icelandic gifts and wooly knits.”

Parking at Seljalandsfoss costs 700 ISK for a car and 3000 ISK for a coach. Your parking ticket will be valid for the whole day and there’s no entrance fee for the waterfall itself.

The reason for introducing the parking fee at this popular location is that the area has to be cleaned, repaired, and looked after. Someone has to keep the site safe and tidy so that it remains as picturesque as it is today.

In the summertime, you can also camp near Seljalandsfoss, just two minutes away from the rushing water. The Hamragarðar camping ground is well-equipped and only 656 ft (200 m) from the torrent. It’s also very close to Gljúfrabúi Waterfall.

Imagine waking up to fresh mist filling the air and the echoing sounds of the waterfalls!

7. What else is there to see near Seljalandsfoss?

“ …Gljúfrabúi…is down a short path to the left if you’re looking at Seljalandsfoss. It’s somewhat difficult to access and doesn’t have a lot of space, but is beautiful and unique.”

Gljúfrabúi Waterfall is considered a hidden gem, often overlooked by travelers. The sparkling 131-ft (40-m) waterfall plummets down a deep gorge behind a cliff. Plus, it’s just 492 ft (150 m) away from Seljalandsfoss!

You can get a unique photo angle by standing inside the gorge, looking up, and watching the waterfall tumble down the walls.

Photos taken at Gljúfrabúi can easily compete with those near Seljalandsfoss. As always, the rule of thumb is to bring along your waterproof gear and protect your camera!

8. When is the best time to visit Seljalandsfoss?

“Winter was very beautiful with great ice formations, but we couldn’t walk up to it and definitely not behind due to the ice.”

Mother Nature sets the rules in Iceland. No matter the time of the year, you might face difficulties with the weather conditions. Always check the forecast before you go.

You can park near Seljalandsfoss and admire it from a safe distance pretty much all year.

In summer, you can also see wildflowers in bloom and green meadows. The paths get quite slippery when it rains, but for the most part, it’s possible to walk behind the waterfall.

In the colder months, the area looks like a winter wonderland, surrounded by ice formations and snow. If you’re planning to visit in winter, bring shoe spikes and warm waterproof clothing to take a walk behind or around the falls.

Sometimes it’s unsafe to walk near the waterfall in winter, due to ice falling from the top of the cliff and icy trails. In such conditions, the path behind the falls will be closed if it’s too slippery.

Still, there is a good reason to visit Seljalandsfoss during the winter months — the Northern Lights! The unique spectacle of Auroras dancing above the waterfall can’t be surpassed.

Be sure to check out this beautiful waterfall any time of year! After all, Seljalandsfoss is something of a celebrity — the waterfall was featured in the reality TV series “Amazing Race” and Justin Bieber’s music video “I’ll Show You.”

With so many rave reviews of Seljalandsfoss, you’re probably itching to see this natural wonder yourself. Check out the many awesome tours that will take you there, like our award-winning 6-Day around Iceland Adventure! 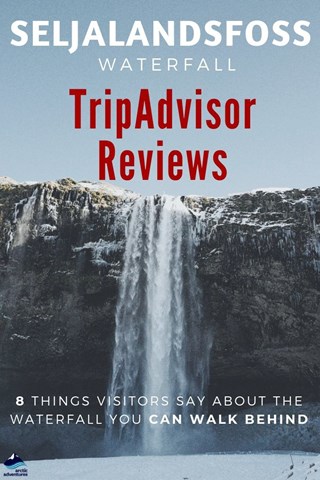