Looking at the names of these waterfalls you may guess that foss is Icelandic for waterfall, and you are correct if you do.

Dynjandi waterfall is the Westfjords largest waterfall and it falls in a particular vail-like shape, narrow at the top and wide at the bottom. Like the veil of a blushing bride. Below it there is 6 more waterfalls that you pass by on your walk up to the big one. It’s about 15-minute uphill walk and there are beautiful rest stops along the way by the smaller falls below.

Gljúfrabúi is often called “the secret waterfall” and tends to go unnoticed next to its big sibling Seljalandsfoss. Not surprising as it’s hidden behind a wall of rocks. But it is worth it to get your feet wet. The name means “Dweller of the Gorge” and is very appropriate as it’s easy to imagine elves or trolls having a hidden home behind this hidden waterfall. Raincoat and waterproof boots or wading shoes are recommended (or simply a change of socks).

Seljalandsfoss is that waterfall that you’ve probably seen on so many pictures that are taken from behind the waterfall. It falls off a high cliff into a small pool below and it’s easy to walk 360° around it, at least when the wet path is not frozen and covered in ice. In the coldest winter months, it can still be enjoyed from the front as it is still a very majestic waterfall. When driving along the south coast from Reykjavík the waterfall is hard to miss as you see from afar on road no. 1.

Brúarfoss means “Bridge fall” and is one of the hidden gems in Iceland. It’s not a big waterfall in any sense of the word but more than makes up for it with its prettiness and uniqueness. There used to be a natural stone bridge over the narrow gorge formed by the waterfall and that’s where it derives its name from. The water running through the small gorge in the river is even bluer than the Blue Lagoon.

Other than being one of the most spectacular waterfalls in North Iceland, Goðafoss has a big role in the history of Iceland. The name means “Waterfall of the Gods” and it is here that the law speaker of the old Althingi, a chieftain, and priest of the old Norse religion, threw in his statues of the Norse Gods as a symbolism of Icelanders becoming a Christian nation in the year 1000.

Svartifoss is one of the most iconic waterfalls in Iceland, surrounded by basalt columns that turn black from the spray of water emitting from the waterfall. Svartifoss is in Skaftafell, which was formerly its own national park but is now part of Vatnajökull National Park, the largest national park in Iceland and in Europe. It’s an easy 30-60 minute walk from the service center in Skaftafell, slightly uphill on a good gravel path. About halfway through you’ll walk past Hundafoss and Magnúsarfoss.

If a child draws a painting of a waterfall it will most likely look quite similar to Skógafoss. It’s a perfect rectangle with the river Skógaá falling straight down off the mountain’s edge. If you have a raincoat or don’t mind getting wet you can follow the river down below and get very close to the waterfall. It is also possible to take the stairs that are next to the waterfall to get a view from above. Those stairs are actually the start of the Fimmvörðuháls trek to Þórsmörk, and above Skógafoss there are numerous smaller waterfalls for the next couple of kilometers.

Hengifoss is one of the highest waterfalls in Iceland at 128 m. The surrounding gorge is quite magnificent, with a colorful rock face that shows the layers of various volcanic eruptions from millions of years ago. It’s about 40-60 minute walk to Hengifoss waterfall, and along the way, you pass by Litlanesfoss surrounded by very high basalt columns.

No list of waterfalls in Iceland is complete without Gullfoss, the golden waterfall, one of the three main sights of the Golden Circle. Gullfoss is one of the most majestic waterfalls in Iceland and it’s the most visited waterfall in Iceland for a very good reason. On sunny days a beautiful rainbow is formed in the mist coming from the waterfall. It falls in two steps with a total of 32 m drop into a narrow gorge. It’s actually possible to go river rafting in that same glacial river Hvítá, though further downstream. 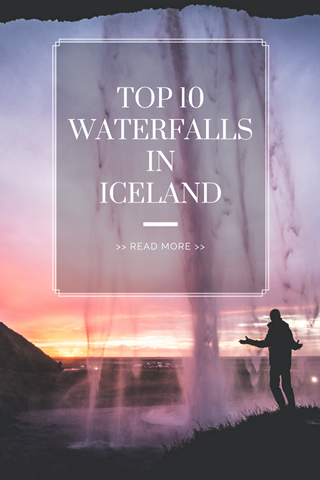 Hike to the Highest Waterfall in Iceland, a Local Favorite

Hike to the Highest Waterfall in Iceland, a Local Favorite

The Laugavegur Trail - A Love Confession

We have reached Landmannalaugar, we get out of the bus right next to a campground that is nothing but bare rocks. Now it is time to meet our supply driver that will make our life easy for the next few days, pack his car, have a quick bite t...

Best Time to See the Northern Lights in Iceland 2020