At first glance, the Icelandic language can be a little intimidating. Some words seem to trail on for miles. And many letters in the Icelandic alphabet are strangers to English speakers. However, it’s not as tricky as it first appears. Read the full guide for more information.

Indeed, Icelandic is quite a fair language. Words are spelled phonetically compared to other languages. And it’s more consistent than some others: It won’t try to cheat you like English does, with words spelled similarly and sounding different (we’re looking at you, “plough” and “cough”!).

So, let’s get started with a few letters, and then get more ambitious with place names and then – for the truly courageous – phrases…

You might’ve seen this little guy before. It’s a good place to start because it’s easier to understand and pronounce than it looks. While it’s daunting because it doesn’t resemble a letter you might know, “thorn” (for that is the letter’s name) is a simple “th”, similar to the sound of thank you.

Thorn (or Þ) has been used in Old English and Old Norse, but Icelandic is the only modern language to still use it commonly.

This one is like a cousin to the word above. It’s a similar “th” sound but never appears at the start of a word, similar to the sound of that.

Another slightly tricky one, but again, easy if you know it: “A” with an accent can have a few pronunciations depending on where you see it. In Gaelic, it’s “aw”, for instance. But in Icelandic, it’s “ow”, as in rhyming with “cow” or indeed, “plough”.

Ú follows the same rule as many European languages: Namely, that it has the same effect as a double “o” – making an “oo” sound.

The best way to pronounce this sound is to channel your inner town crier (those people that shout and ring a bell when giving public announcements). “Oyez, Oyez”

An “I” with an accent is pronounced “ee”.

How to Pronounce Iceland’s Place Names

Okay, are you ready to try out your newfound skills? We’ll kick off with Iceland’s capital.

Ray-kya-veek. The only new information might be the “j” here is pronounced as an English “y”. But for anyone who studied German, that variation will be familiar.

Before you started reading this article, you might have said “Porsmurk”. But now you know better. With the “thorn” at the start, Þórsmörk is pronounced “Thórsmurk”.  Think of Thor from the Marvel superhero movies smirking to himself and you’ll never forget it!

No, wait! Come back. This isn’t as hard as it looks. Loo-ga-vay-gur – it’s not unlike the name of Mambo Number Five singer Lou Bega.

Now you can sound authoritative and learned when talking to locals about the famous Laugavegur Trail.

People from Iceland and far beyond flock to Reykjadalur for its beautiful landscapes and abundance of warm-water springs and streams.

At this stage, you should be able to have a stab at the pronunciation: Much like Iceland’s capital, it’s “ray-kya-da-lure”. Easy. See what we mean about it being a fair language?

Now that you’ve conquered some letters and place names, let’s see how you do with common and useful phrases…

Always popular, wherever you are. The Icelandic for “please” is the wonderfully rhythmic, vinsamlegast. Spelled as it’s said, its easy (and fun!) to say; “vin-sam-le-gast”.

Another handy phrase, though this one might take more practice. “Takk fyrir” is pronounced “thak-fear-ick”. The “r” rolls a little and the closest English has to “ir” is “ick”.

Icelanders love their beer, and whatever your taste, there’s a cool, frothy drink waiting for you behind any bar in Iceland.

To order a beer, it’s acceptable to say: “one beer, thanks”. Or “Einn bjór, takk”. For fans of Icelandic band, The Sugarcubes, the band members Einar and Bjork would give you a steer. If you’re unfamiliar with Icelandic 90s indie rock, the beer order is pronounced “eye-n b-y-oar, tack”.

Where is the bathroom?

The Icelandic for “bathroom” is “klósett” – like “close it” mixed with “closet”. “Hvar er klósettið?” (“Where is the bathroom?”) isn’t too much of a leap, pronounced: “quer air close-ith”.

Something you might be saying to locals on your visit, or to friends and families when you return. “I love Iceland” translates to Ég elska Ísland, or phonetically, “yeg helska eesland”.

The Icelandic language is a lot like the country itself – beautiful and steeped in history, with influence from Vikings to Danes. And its words have been used to share descriptions of epic glaciers, monstrous volcanos and incredible mythology over the centuries.

Whether you’re just on a day trip or venturing further afield, we hope this little language guide was a helpful primer before you visit. 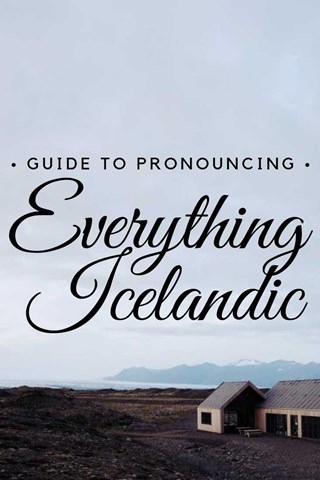