Menu
More
Sofie
|October 8, 2019
Sofie is a free-spirited journalist from Kentucky who lives a nomadic lifestyle, and spends much of her free time in airports on layovers. Hobbies include dancing and sipping bourbon.

For Disney's Frozen 2 Elsa leaves Arendelle for Iceland. Check out the 10 Easter eggs we found that prove the sequel is really set on the Nordic island.

Almost six years ago, Disney’s Frozen introduced us to the fictional world of Arendelle, a land based on Norway.

For the upcoming sequel to this wintery saga, the creators turned to another Nordic country for inspiration — Iceland.

Location research trips are common practice in the film industry, even when creating animated worlds. The filmmakers for Frozen 2 took a northern expedition to a couple of countries, but the “stark beauty of Iceland” stood out.

“Iceland really felt mythical. It felt like nature was so awesome and powerful,” said Marc Smith, Director of Story, to Oh My Disney.

“I think that trip not only inspired visuals in the world, but it did something else.

Just immersing us 24 hours a day in that environment, our imaginations truly were piqued, and so a lot of story ideas developed during that trip as well,” writer-director Jennifer Lee said at a press junket at Walt Disney Animation Studios.

We watched the trailer and spotted obvious nods to Iceland

In sneak peeks of the icy sequel, we leave Arendelle for darker landscapes

The first scene of the Frozen 2 trailer shows Elsa standing before crashing waves on a black sand beach.

This dramatic setting might seem like the brainchild of talented animators, but black sand is common on Iceland’s beaches

People guessed that the scene was supposed to be set on the world-famous Reynisfjara Beach on the South Coast of Iceland.

Djupalonssandur, a sandy beach and bay on foot of Snaefellsjokull in Iceland

However, director Chris Buck confirmed that the color palette and landscapes were, in fact, inspired by Djúpalónssandur Beach. This black sand beach sits on Snæfellsnes Peninsula in Western Iceland.

Djúpalónssandur is not the only spot in the film that was inspired by Iceland.

Throughout the trailer, we can see other sights that look very similar to popular attractions in the country

A screenshot from Disney’s Frozen 2 trailer & the Skogafoss waterfall

Or the colorful Icelandic Highlands

Along with the famous Mt. Kirkjufell

The intense conditions of Iceland are the perfect symbol of Elsa’s wild power. In the trailer we see the ice queen standing before a possible jökulhlaup or “glacial run.” These ice water floods occur when volcanoes erupt underneath glaciers.

And that’s not your average seahorse — it’s a Nykur

As we see in the very first trailer, Elsa must take on the power of the sea. Below the waves, she encounters a water spirit called the Nokk, or Nykur in Icelandic. Mythology and folklore played a huge role in both films. The writers were inspired by Hans Christian Anderson and older Scandinavian tales.

“Because Iceland was mostly founded by Scandinavian folks, there’s a bit of a bridge,” explained Lee. “The Nokk stood out a bit because the Nokk had come from old Norse myths and the wind spirit from the Nordic region and Scandinavian culture.”

Don’t forget the troll who can summon the Northern Lights

A troll who can conjure images with the Northern Lights? It doesn’t get more Icelandic than that. Grand Pabbie the troll makes an appearance in the trailer and demonstrates his powers with the aurora borealis.

It is unclear whether he is conjuring up visions of the future or the past, but we would recognize those green, red and purple lights anywhere. Trolls play a central role in Icelandic mythology.

From what we know so far, Frozen 2 focuses on the origin story of Elsa’s powers

So far, fans know the sequel will explore the origin of Elsa’s magical powers. The brief Disney synopsis reads that “Elsa and her sister Anna will embark on a dangerous faraway journey, as they seek to find the voice that is calling Elsa.” In the released trailers we see the sisters on their journey across a variety of landscapes.

Movie-goers will notice a seasonal change in the film. The snow has cleared and autumn has come to Arendelle, which is more representative of Anna’s personality.

When the sisters leave the kingdom behind on Elsa’s quest, the landscapes become more representative of her icy powers.

“It was kind of a stark contrast between Norway and Iceland that framed the concept for us,” Buck told the press. “Anna felt at home in Norway with its fairytale settings, but Elsa felt strangely at home in this dark, mythic Iceland.”

This is not the first time Iceland’s unique landscapes have been featured in cinema and T.V.

The Secret Life of Walter Mitty and James Bond’s Die Another Day are the most famous films explicitly set in Iceland.

However, the list of films that have used the volcanic island as a backdrop for fictional worlds is quite long. Sci-fi and fantasy productions like Star Wars and Game of Thrones used the country’s diverse landscapes for their creations. 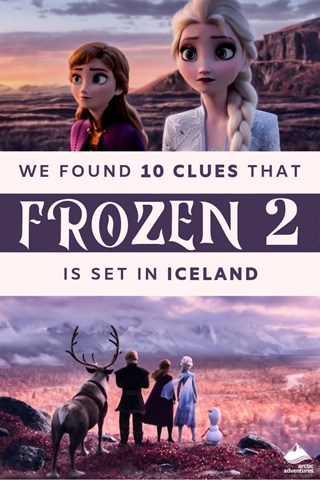