6 Reasons to Go Snorkeling in Iceland

6 REASONS TO GO SNORKELING IN ICELAND

Menu
More
Kathryn
|November 1, 2018
As part of my Event and Business Management degree, I decided to move to Iceland to join the marketing department at Arctic Adventures. I love exploring, photography and going on new adventures.

Iceland and snorkeling don't tend to be two words that you put together, but here's 6 reasons as to why it should be on your Iceland bucket list!

Iceland, it’s fair to say, is not the first place that people think of when they hear “snorkeling”, but it should be. There is so much you can do in Icelandic waters that isn’t available on other vacations.

There’s nowhere else on the planet where you can swim between tectonic plates, nowhere with water so pure and clear that you can see for 120 metres; and nothing like swimming near a volcano or between continents.

Snorkeling is traditionally associated with the tropics, as you negotiate sand, try to spot pretty fish, and share space with countless sunseekers.

Try to put that all out of your mind when you think of Icelandic snorkelling. Firstly, the landscape is stunning and distinctive (there’s a reason why the country has played other planets and mythical lands in TV and movies). This is a country of pure, clear water; possibly the freshest air you’ll ever inhale; and breath-taking glaciers and volcanos. So even before you put on your flippers, snorkelling in Iceland is different.

Once you enter the water, you’ll be transported to a part of the world that only a handful of people experience – tranquil, otherworldly and most of all, clear. Speaking of clear water…

5. The Visibility Will Blow You Away!

The visibility in Icelandic waters is second to none. At an astounding 70-120 meters visibility (depending on the day), Icelandic water is quite possibly the clearest on Earth. To put that into perspective, most dive sites around the world average 10-30 meters of visibility at best.

Some swimmers have said that this clarity makes the water feel like air; and that travelling through it, able to see as clearly as on the surface, is like flying.

4. The Currents Are Gentle

Many of the best snorkeling sites in Iceland are freshwater. This usually means that swimmers will encounter nothing stronger than a stream or river current, as their snorkelling area is relatively sheltered from the might of the ocean.

Yes, there are more extreme Arctic adventures in Iceland, some even involving water and rivers (river rafting and climbing inside a volcano for instance), but, once you can swim independently, snorkeling is easy, even meditative.

3. It’s the Only Place where you can Swim Between 2 Tectonic Plates

The Silfra Fissure is a rift between the North American and Eurasian tectonic plates. It’s a (relatively!) recent rift, which took place in the 18th Century as a result of an earthquake. In fact, it’s the only place on the planet where you can swim between two tectonic plates – or two continents, and people travel from all over the world to experience it.

It’s beautiful both on land and in the water – resembling a mountain that’s been cleaved in two and then filled with the purest, bluest water on Earth.

Yes, you will technically be in the Arctic and that is not quite the same as snorkeling in the tropics: To use an informal description, the water has a mild chill. It will be above freezing at around 35 degrees Fahrenheit, and easily comfortable enough to snorkel or dive in for 30-40 minutes (the typical swim time). That said, you will be wearing a dry suit, gloves and hood, with only your hands and face exposed to water.

You’re unlikely to get completely wet (a dry suit serves the opposite purpose of a wetsuit!), but even if you do, the worst that should happen to you is a bit of coldness and some mild discomfort. It’s a good idea to bring a towel and change of clothes, just in case this unlikely event comes to pass. If nothing else, bring spare socks!

1. Local Guides Can Enhance Your Experience

Iceland has a wealth of stunning, natural attractions and theoretically, you can drive to a swim site yourself, but we wouldn’t recommend it. A local guide will know the best places to go, the best practices, what to do in case of emergency and other key details. They’ll also provide that precious, precious dry suit!

Enlisting the help of an experienced guide, especially when snorkeling, outsources the research, worry and logistics of your Arctic adventure, leaving you free to (ahem) soak up the natural splendor. You can find out more about snorkeling and diving in Iceland on our tour pages. 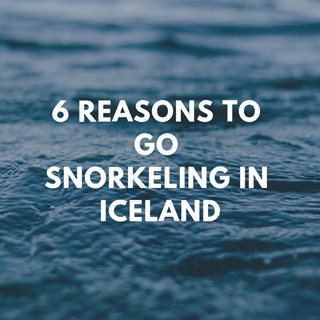 The Most Exciting Ways to Explore Iceland

Most tourists who visit Iceland rent a car to explore the country’s many beauty spots. However, there are lots of ways to explore Iceland without the hassle of having to rent and drive a car.

Snorkeling in Silfra: Everything You Need To Know

For a moment, I stop breathing. Not from fear, but from pure awe and wonder. I am experiencing a blend of deep serenity and insane euphoria.

Snorkeling at Silfra fissure is an activity like no other. It's the only place in the world where you can snorkel or dive in between tectonic plates. Instagram is filled with great captures from this place, we gathered a few.